Advent Aircraft Systems has unveiled its concept for a new self-contained electric power brake system, a follow-up to the company's eABS anti-skid braking system. The Advent Electric Power Braking System (ePBS™) would be aimed at new all-electric aircraft designs, new aircraft with traditional hydraulics but desiring an electric braking system, or as a retrofit for existing aircraft. 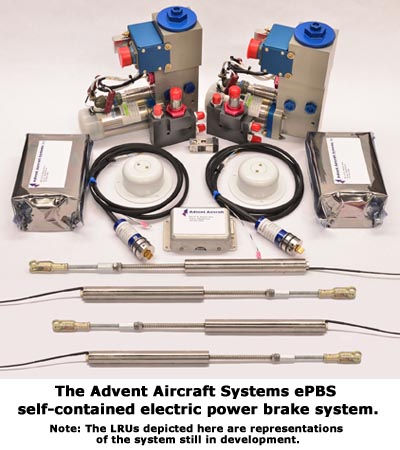 Incorporating the Advent eABS as an integral part of the overall design, the ePBS would be a brake-by-wire system that consists of brake pedal sensors and feel units, a primary brake electronic controller, parking and emergency brake controller, wheel speed transducers and hubcaps, and both primary brake and emergency/parking brake hydraulic units. The electronic controllers would send commands to the brake valves, using state-based logic, based upon the applied brake pedal force. There are no quirky system behaviors for which the pilot must allow.

With a total installed weight target of 30 lbs., the ePBS would be compatible with all installed or specified wheel brake assemblies for aircraft ranging from 3,500 lb. to 30,000 lb. MTOW. The system would require no external hydraulic power and would eliminate master cylinders, hydraulic tubing and all hydraulic fluid from the cockpit and cabin. The ePBS would be compliant with FAA and EASA requirements and SAE AIR-5372a & AS-8584 guidance.

"Advent Aircraft Systems wasn't founded to be a one-product company. The success of the Advent eABS has yielded invaluable feedback from customers and the all-electric braking system was the logical next step," said president Ron Roberts. "Using the eABS as the basis to develop the ePBS not only has built-in efficiencies from a production standpoint, but also provides an opportunity to expand our customer base into aircraft currently not served by the eABS."

"The ePBS would provide a natural feel, allowing the pilot to modulate the braking action for smooth directional control," continued Roberts. "Combined with the benefits of the eABS, the result would be an elegant and robust system that would provide peace-of-mind to the pilot."

The target price for the self-contained ePBS would be lower than or at least competitive with a hydraulic system with equivalent features. Further information on ePBS concept development will be available from Advent over the coming months. Meanwhile, interested OEMs may contact Ron Roberts, (918) 388–5940 to discuss potential applications.