The aircraft completed the ferry flight from Wichita to Australia in September, where they will be stationed at the RFDS base in Broken Hill, New South Wales. 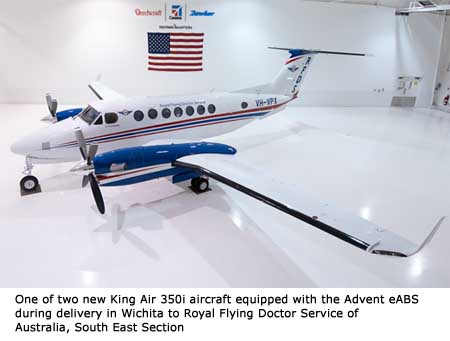 "While we understand that some stopping performance improvements may be pending, we liked the additional safety provided by the Advent system – particularly when you consider many of our operations are on short gravel or natural surfaces which can sometimes be problematic" said David Charlton, General Manager Aviation and Strategic Development, RFDS South Eastern Section.

"We deeply appreciate the RFDS evaluating the safety and utility the eABS provides to the King Air in real-world conditions," said Advent Aircraft Systems Managing Director, Ken Goldsmith. "We welcome the opportunity to support the RFDS operation of these aircraft, which provide such a valuable and important service to Australians living in rural and remote areas of the country."

In addition to the two new King Air 350i's, the RFDS fleet includes 19 other aircraft currently capable of being equipped with eABS, such as the Pilatus PC-12 and King Air B200. The RFDS expects to make a decision regarding eABS on other fleet aircraft over the next twelve months.

Advent eABS is a trademark of Advent Aircraft Systems, Inc.