March 6, 2017, Tulsa, OK – Advent Aircraft Systems has received from the FAA an STC for its proprietary eABS™ anti-skid braking system for the Beechcraft Model 3000, which has the US military designation T-6 Texan II. The STC approval follows a rigorous 20-month installation, testing and evaluation program in collaboration with Beechcraft Defense Company (BDC) that culminated last November. All work was conducted at the BDC facilities at Beech Field in Wichita, Kansas using the BDC T-6 demonstrator aircraft. In addition to rigorous engineering testing, evaluation of the eABS included demonstration flights for US and international T-6 operators and potential customers./p> 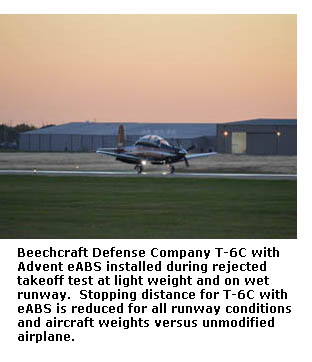 The Advent eABS adds a new level of runway performance, dispatch reliability and cost savings for T-6 operators by reducing the risk of flat spotted or blown tires during training, extending tire life by as much as 300% and offering reduced stopping distances in all runway conditions.

Ron Roberts, president of Advent Aircraft Systems, said, "We are pleased to have had the opportunity to work with Beechcraft to add our eABS to the operational utility of the T-6. Pursuing military aircraft applications for the eABS is one of our primary goals. We look forward to supporting BDC and their customers as they look to install the system on their T-6 aircraft." 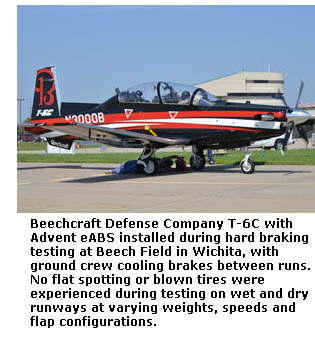 The T-6 has a considerable customer base, with over 900 aircraft in operation worldwide.

The Advent eABS is a proven, lightweight, low-cost and easily-installed anti-skid braking system designed to add anti-skid capability to aircraft up to 20,000 lb. MTOW, equipped with manual (un-boosted) braking systems. The system requires no change to existing braking system components. Installation requires minimal downtime, either as a stand-alone installation or during scheduled maintenance.

Advent also provides complete power braking systems with anti-skid for other aircraft, to include use of brake-by-wire.

The Advent eABS eliminates flat-spotted and blown tires during aggressive stopping and includes touchdown protection and a programmable low-speed cut-off. Improved tire wear and less risk of a flat-spotted or blown tire saves the operator money and the time and expense of an unplanned downtime. The system also offers the operator an alternative to the use of reverse thrust, helping reduce propeller erosion and the risk of FOD ingestion while gaining the ability to confidently apply the brakes immediately after touchdown or in situations where hard braking is desired, such as a rejected takeoff.