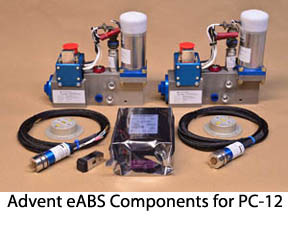 The program, launched on August 30th, was originally set to close on November 3rd, at the end of NBAA. However, in order to allow reasonable time for operators who participated at NBAA to select an authorized dealer and for the dealer to generate a purchase order, the program has been extended until the end of the month.

To kick off advanced orders for the B200 eABS, the company is offering a $6000 rebate to the first ten operators in the US that commit to purchasing eABS for their B200 during the incentive program, with delivery subject to certification. Operators who order under the incentive program will have up to a year to complete installation after the STC is issued and receive their rebate. 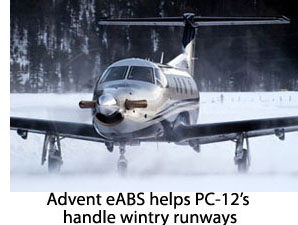 In conjunction, Advent will make any remaining incentive pricing slots available until November 30. Interested operators placing orders after all available incentive slots have been filled would be considered alternates, should an earlier participant not meet the November 30 deadline for Advent's receipt of a firm purchase order from the operator's selected dealer.

Tom Grunbeck, Advent vice-president of marketing and sales, said "We garnered considerable interest for the PC-12 system during NBAA. We felt it only fair to extend the incentive period so that those operators who showed interest would have the time required to secure a purchase order within the incentive program time frame. The extension coincides with the launch of our King Air B200 incentive program, which was announced at the start of NBAA."

The Advent eABS is a proven, lightweight, low-cost and easily-installed anti-skid braking system designed especially for turbine powered aircraft up to 20,000 lb. MTOW. The system has excellent braking performance and requires no change to existing braking system components. Installation requires minimal downtime, either as a stand-alone installation or during scheduled maintenance.

The Advent eABS adds a new level of runway performance and dispatch reliability for PC-12 operators by providing better directional control, reduced tire wear and potentially shortened stopping distances on dry runways or those contaminated with water, ice and snow.

The system will eliminate flat-spotted and blown tires during aggressive stopping and includes touchdown protection and a programmable low-speed cut-off. Improved tire wear and less risk of a flat-spotted or blown tire saves the operator money and the time and expense of an unplanned downtime. The system also offers the operator an alternative to the use of reverse thrust, helping reduce prop erosion and the risk of FOD ingestion while gaining the ability to confidently apply the brakes immediately after touchdown or in situations where hard braking is desired, such as a rejected takeoff.